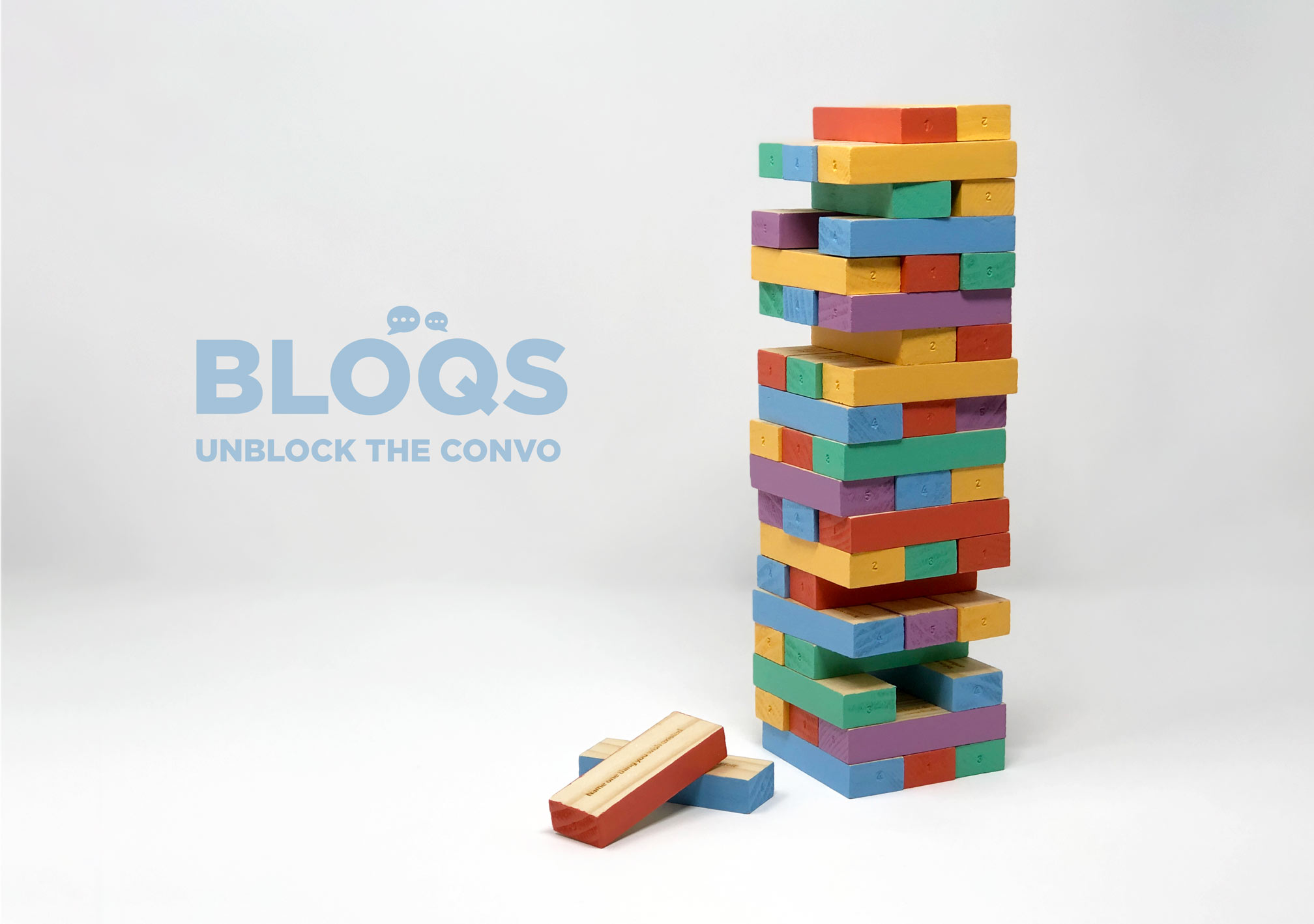 Social Games Against Crime
Overview
Bloqs is a social game designed for male prisoners to interact and communicate with their young teenage children during prison visits. It is aimed to build relationships and prompt communication between the child and father. The game is built on the foundations of Jenga, but with a Q&A reward currency system. 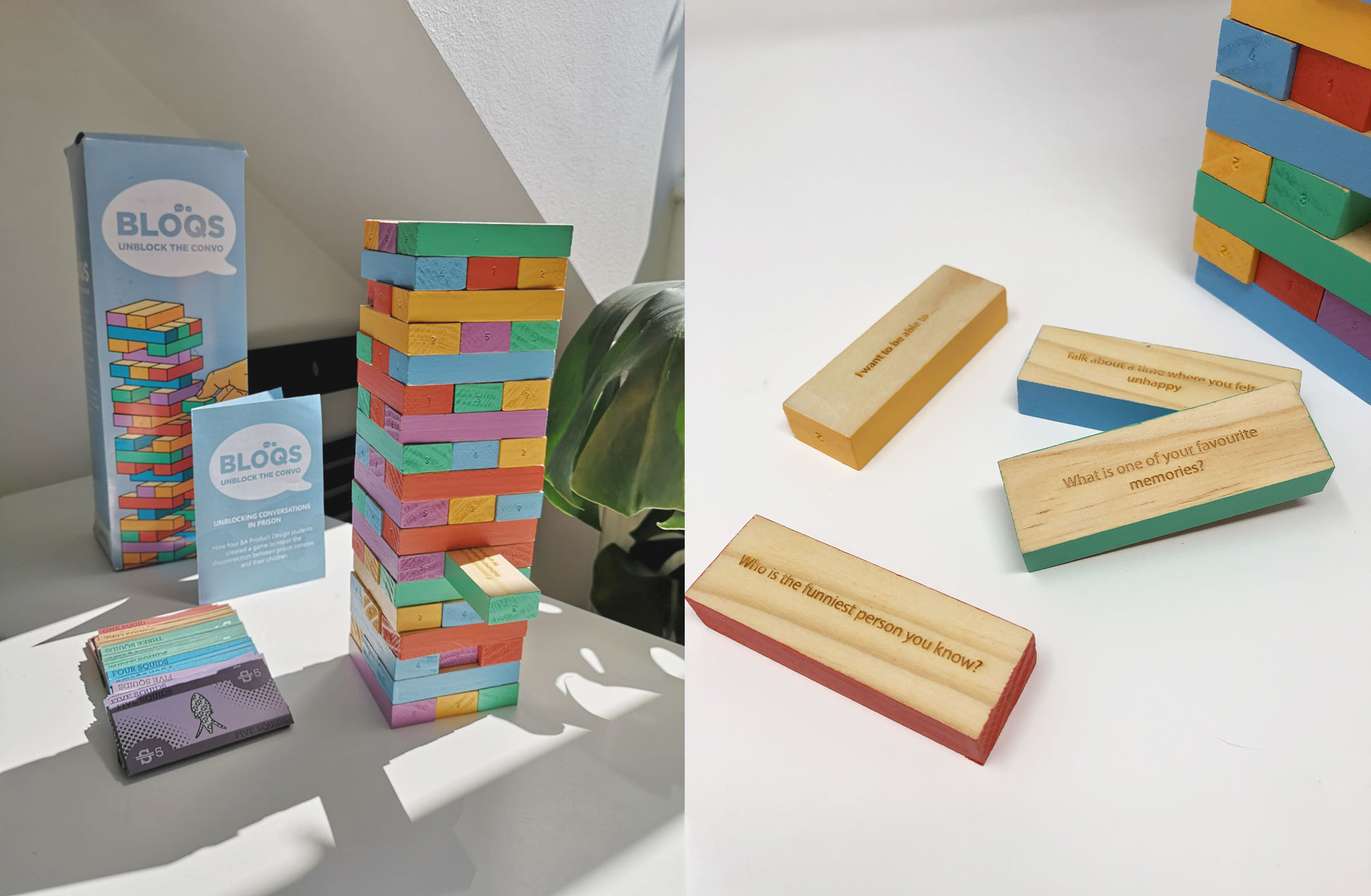 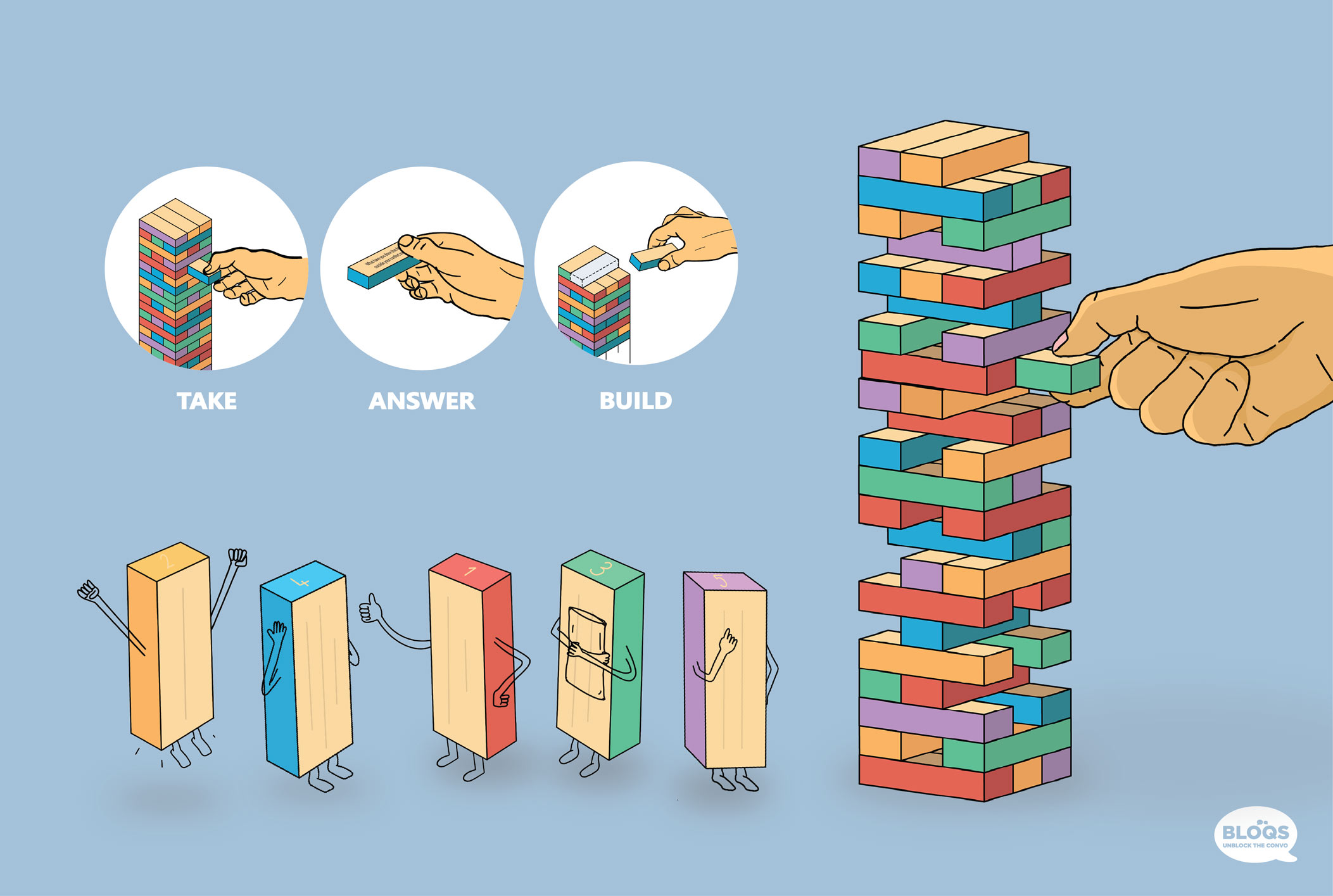 How to play
Bloqs is played by following 3 simple steps - Take, Question, Build. Firstly, players successively take a Bloq out, without knocking the stack over. Each Bloq, has two prompts written on it, with each colour corresponding to a point value, difficulty scale and level of intimacy intended to be invoked. By picking a prompt, in one game mode the player answers the prompt themselves, in another you ask the next person and they respond. On successful answering of the question (judged by the consensus of the other players), the person receives in-game currency, called ‘Squids’, corresponding with the colour/difficulty. If the player does not answer, they get no points and the round moves on. The player who pulled the brick must place it back on top, building a gradually more unstable stack until the game is over. This ultimately means that through answering questions, you build a level of knowledge and intimacy with the opposing player. Which in turn build conversation and develops their relationship.

Psychology behind Bloqs
Bloqs and the question/points system is based on the Social Penetration Theory, often referred to as The Onion Theory, is a theory of interpersonal communication and relationship that seeks to describe how relationships move from weak and relatively shallow, to deeper and more intimate connections. Onion theory proposes that relationship development occurs primarily thorough self-disclosure and intentionally revealing personal information. Through this, relationships move between ‘layers’ of deepness or intimacy. Likewise, as individuals grow apart, they move ‘back up’ through the layers as the personal information they once shared is no longer accurate/meaningful. The metaphor of an onion is used to describe these levels and the ‘jumping’ between layers that occurs. 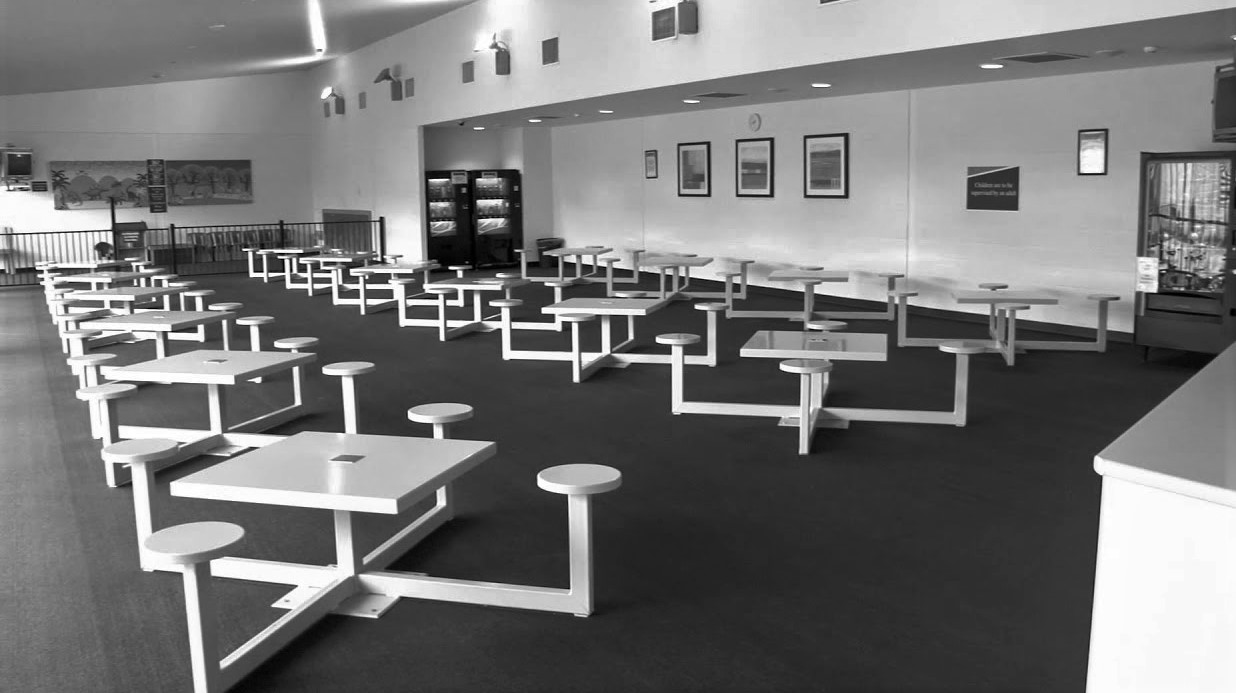 Why?
In a time of rising prison population games such as Bloqs become key. Extending the category of Social Games, Bloqs was inspired by Captivated, a project South Denmark University’s Social Games Against Crime team which sought to tackle the same issue of parental alienation in prison.

Background
Incarceration can feed into a vicious cycle of crime, anti-social behaviour and deprivation. The role of relationships between incarcerated fathers and their children is key when understanding one of the problems of rehabilitation. Children and adolescents with stronger connections to their parents are far less likely to suffer health issues, do well in school and avoid crime than those whose relationships breaks down. Kids are brought to visit with relatives because as adults they understand the importance of visiting themselves. The teen years are when people begin to drift apart and people stop visiting. Bloqs was designed in response to the issue of : How can we, assuming no radical change in incarceration trends, help incarcerated fathers reconnect and maintain connections with their children on the outside.. 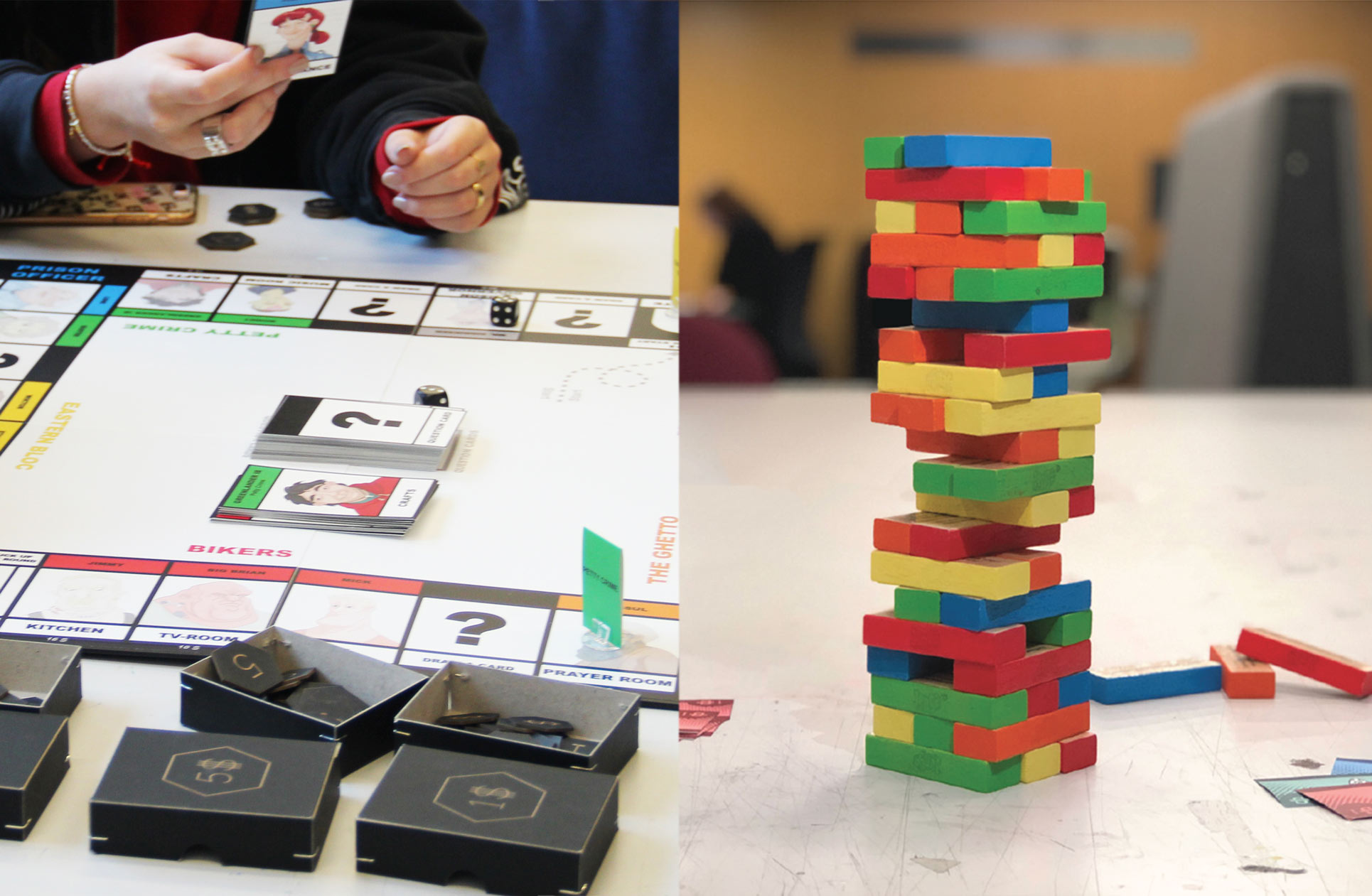